Transport Secretary, Chris Grayling visited Milton Keynes to see the state of local roads and to discuss safety on our railways. 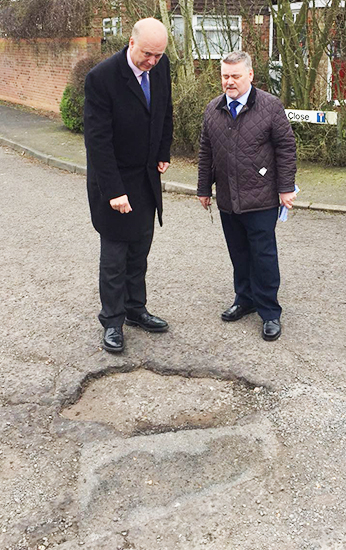 During his visit, he and Iain Stewart, MP for Milton Keynes South and government champion for the Oxford-Cambridge-Milton Keynes corridor both inspected the roads on Fairways Estate in Bletchley Park. Accompanying them were local activists and the May 2018 local election candidate for area, Allan Rankine. The Transport Secretary commented  on the level of funding that was already allocated to Labour-led Milton Keynes Council which clearly was not being spent but promised that more will be done to help improve local roads.

Following the walk through Bletchley Park area, a visit was made to Bletchley train station where the safety of our railways and the economic boost from the government's investment in the East-West Rail Link were also discussed.

Iain Stewart MP said "I am delighted to have the Transport Secretary visit Milton Keynes today to emphasise the government's ongoing commitment to investing in our local area. With these continued investments, I am confident that Milton Keynes will remain a central part of job creation in the South East"