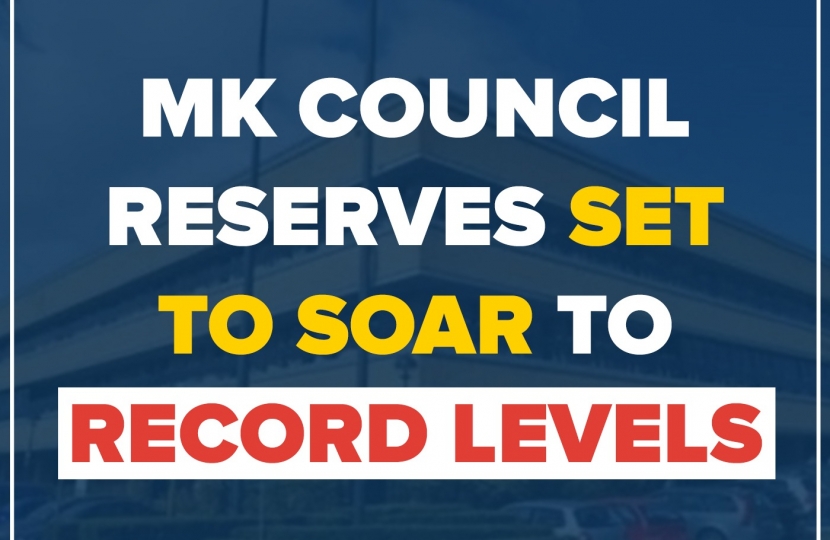 The Conservatives have slammed the Labour-led Council for allowing council reserves to reach record levels. MK Council’s 2021/22 draft budget has revealed that general fund reserves have reached levels way above what would be considered “prudent.” General fund reserves are forecast to increase from £23m currently to £30m by April next year.

As part of their role in scrutinising the Council budget, the local Conservatives are now seeking to understand how the reserves have been allowed to grow to record-levels despite MK reeling from a third national lockdown because of the Covid-19 pandemic.

The aim of the general fund reserve is to ensure that there are adequate funds to cover risks to the Council’s general balance. The budget risk assessment sets “minimum prudent reserve” levels at £26m. Conservatives believe that the minimum is set too high and that the forecasted reserve of £30m is massively “overweight”.

The bloated general fund reserve includes a £4 million contingency to protect MK from the risk of leaving the EU. In their Brexit “Emergency Planning”, the Labour led Council talks about “extreme scenarios” and notes that contingencies are needed to help “protect property, residents and businesses”.

Local Conservatives have criticised this fund as “fearmongering” and condemned the Council for using taxpayer’s money to peddle anti-Brexit rhetoric at a time where local jobs are at risk and services are being cut.

Cllr Allan Rankine, the Conservative Group’s Finance Spokesperson, said:
“Labour are planning for ridiculous Brexit emergencies when the reality is that MK residents are facing the severe economic repercussions of a third Covid-19 lockdown.

The reserve level is not prudent – it is set too high. We should be using some of these resources now to protect local jobs and support small businesses.