Conservative Councillors are attempting to force Milton Keynes Council into a u-turn over recent changes to recycling sack provisions.

The Labour-led Council forced the changes through last year which saw the regular delivery of recycling sacks to homes stopped and these being removed from shops and public buildings.

The old system was replaced and residents were forced to order online for sacks but the process unravelled over Christmas as it emerged that new rolls of just 20 sacks could only be ordered at six weekly intervals. The process was also overwhelmed, meaning hundreds of households didn’t receive their orders in time for the Christmas period. At the beginning of January, the Leader of the Council admitted some households who ordered in November may still not have received their rolls.

Residents have taken to social media to criticise the council. Many argue they order but don’t receive the sacks and people have admitted to using black bags as they have run out of recycling bags. 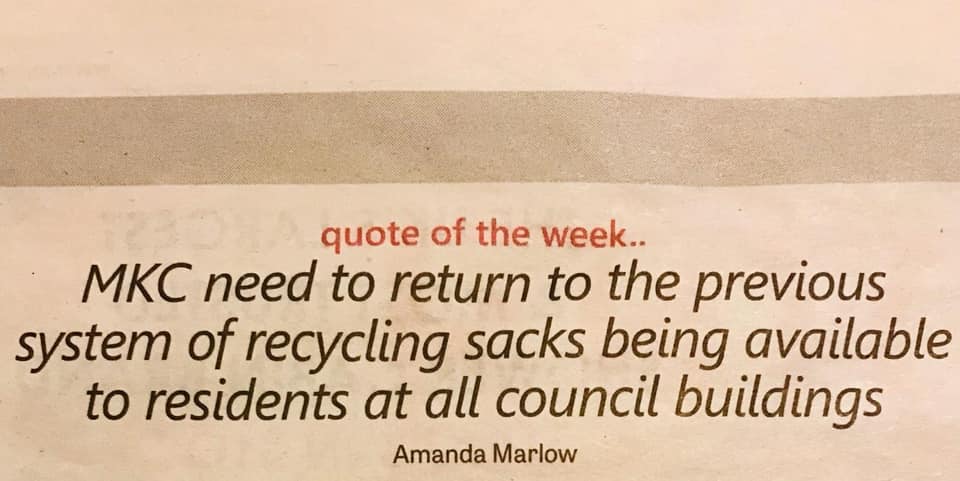 At a meeting of Full Council on Wednesday, 23rd Jan, Conservative Group Leader Cllr. Alex Walker put forward a motion calling on the Council to acknowledge the system has failed and to reverse the changes as soon as possible.

“This Labour Council has a miserable record on recycling. When they took over in 2014, it was up at 54%; last year it was down to 51% and with these recent changes I am confident they will fall even further.”

“We warned them when they proposed this change, but they didn’t listen. Because of the huge backlog of orders they have not made savings they wanted to. Complaints regarding waste and recycling shot up at the end of last year. It has been a real mess and they need to hold their hands up and say they got it wrong. The minor changes in recent weeks have not made a slight bit of difference to public sentiment."
In a separate item Conservative Councillors will also attempt to force Labour into agreeing to reach 70% recycling rates by 2025.

Both the Labour and Liberal Democrats voted against the Conservatives' motion, therefore continuing the misery for residents. Conservative Councillors will continue fighting on behalf of residents to reverse this Labour-Lib.Dem policy.

The Conservatives have vowed to engage in an assault on the rising levels of anti-social behaviour and crime in Milton Keynes if they take control of MK Council on May 7th.